AIRCAT 1150 Killer Torque vs Ingersoll-Rand 2135TiMAX – Which One Is For You?

When it comes to the online market, you can very easily be tricked by the variety of things offered there. The prices, as well as the quality differ so much that it is pretty hard to tell which one’s better, but we can give you an inside of two very useful and bought products: The AIRCAT 1150 Killer Torque and The Ingersoll-Rand 2135TiMAX.

Update: Due to the huge popularity of this post, we decided to have a closer look at both the impact wrenches seperately. You can read the indepth reviews on the AirCat 1150 here and the Ingersoll Rand 2135TiMax here.

Although they are both useful and fortunately, they both work pretty well for the things they promise to do, there are slight differences between them that tear them apart and that can affect your decision over which of the two to pick.

Both work as pneumatic tools and weight around 5 pounds, there isn't too much of a difference between the two when it comes to that. However the Ingersoll-Rand 2135TiMAX is slightly smaller, coming at the dimensions of 7.35 x 3 x 6 inches, while the AIRCAT 1150 Killer Torque has the dimensions of 7.5 x 2.8 x 7 inches.

Both are comfortable to be carried around and used, but the Ingersoll-Rand 2135TiMAZ feels slightly easier. Neither of them require batteries, as they're both air powered.

The Ingersoll Rand 2135TiMAX offers a speed of 9800 rpm, a maximum reverse torque of 780 foot pounds and a forward torque of maximum 1100 foot-ponds, while the AIRCAT has a speed of 9000 rpm and a torque of 1295 foot-pounds. The AIRCAT obviously has a bigger torque power, doubling the other. They both have a drive size of 1/2 inch. 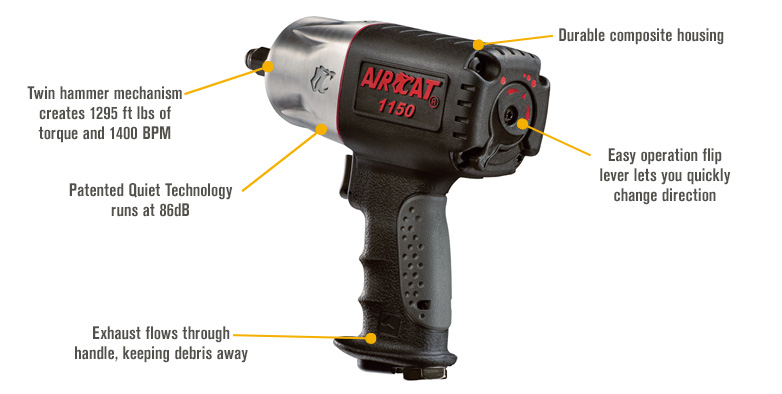 Although the Ingersoll Rand 2135TiMAX has a patented quiet tool technology to reduce the noise, its noise level goes up to 109 dB, while at the AIRCAT is goes only to 86 dB. The AIRCAT is slightly quieter, but they both are reasonable when it comes to the noise they make. Compared to others on the market, they both are good enough.

They both come with a two year warranty. The finish at the AIRCAT 1150 is made of aluminum, while at the Ingersoll Rand is made of titanium. Taking this into account, the Ingersoll is perhaps built to last longer, but they both take the shocks well and they’re both resistant.

Check out the video below for a handson comparison.

About the AIRCAT 1150 Killer Torque, people have however complained about the fact that the torque does not go as up to 1295 foot-pounds. Their opinion is that it reaches somewhere around the mark of 500-600 foot-pound. Truth to be told, it is pretty high, but the product works wonderfully, so you don’t really notice that. It does its job pretty well, so even though the numbers written might be too big, it’s not that noticeable.

However, the Ingersoll Rand 2135TiMAX is sold at around $250. The price, feels slightly higher than it should be. Of course, for what it’s supposed to do, it does it pretty well, but the price should have been dropped a little. Compared to the AIRCAT 1150 Killer Torque, having almost the same features, the price is 100 dollars higher than the AIRCAT’s, and that feels slightly unfair. It does a marvelous job, nonetheless.