If this sounds like you, continue on. The 2135TiMAX impressed us when we first checked it out – so much so that we decided to write an entire comprehensive review on it.

Below is that review – specs, strong points, weak points, and more. If you’re considering buying the 2135TiMAX or any comparable impact wrench, read this before you pull the trigger.

Here are the specs of the 2135TiMAX – we’ll start with the ordinary features, and end with that makes the 2135TiMAX truly unique.

● Made by Ingersoll-Rand – this says quite a bit in itself. That name is one of the most trusted in hardware tools, and     especially in impact wrenches

● Short, compact, and ergonomic – your hand fits in smoothly, and you never feel wrist strain, even at maximum power. (Click here to view pictures of it in-hand.)

● 750 ft/lbs of torque – this in itself isn’t too impressive, until you get to the next bullet…

● 4 pounds – Ingersoll-Rand created the 2135TiMAX to be one of the most lightweight impact wrenches on the market, and in terms of the ratio of power to weight, the 2135TiMAX has the best in its class – by far!

Now you know the basics – let’s break down each bullet so you can determine whether or not this impact wrench is for you.

Impact wrenches are amongst the top-used tools in any mechanic or handyman’s arsenal – because you use them so often, you need them to work over time, and you need to be able to fix them quickly when they hit a snag.

The warranty on the 2135TiMAX is two years for both parts and labor – if you push the wrench too hard and you need it repaired, Ingersoll-Rand will take care of it for you. Easy.

A lot of the time, though, you need the tool fixed right away… and not in the couple of weeks that it takes when you send it in. If that’s needed, as long as you have a bit of fixing-up skill, you can call up Ingersoll-Rand and they’ll help you repair it on the spot – they have legendary support, to say the very least.

What we’re trying to say is that when you get the 2135TiMAX, you get an impact wrench that you can rely on. Not only do all of the reviews attest to its durability, but the brand behind it is genuinely incredible as well. And that’s important – a handyman is only as good as his tools. Tools that can’t be fixed aren’t great tools.

Super compact for mobility + light as a feather

If you’re using your impact wrench in one fixed location, we recommend getting a corded impact wrench – you’ll get more power for your buck. But most of the time, we’re mobile with our impact wrenches. Even if we’re only moving a few feet each time, a cable is just asking to get tangled.

So remove the cable and you’ll be completely mobile, right? Wrong. Cordless impact wrenches are often too big or too heavy. This results in you lugging a unit across the room… and often times, manufacturers will compromise on not having a cord by adding extra pounds to the tool. Your “portable” impact wrench is now just sacrificing more weight for less cord.

Ingersoll-Rand recognized the need for an extremely mobile and lightweight impact wrench with the 2135TiMAX. It’s not going to give you the most power. But when you consider both power and mobility, four pounds, a ridiculously short length (click here to see pictures), and 750 ft/lbs is nothing short of impressive.

On top of the power and the weight, the patented “Quiet Tool” technology on it means that you won’t hear an engine rumbling in your ear.

Compared to other impact wrenches, the 2135TiMAX is like a soft whisper vs. an air horn. One customer even said that you can talk over it.

If you’ve owned an impact wrench before, you know what one of the worst things is when your wrench starts leaking. Not fluid or anything like that – small pockets appear and air passes through them instead of where you’re directing the wrench. Over time, these pocket add up to make your wrench operate at 90%, or 80%, or even 50% of what the original power was. 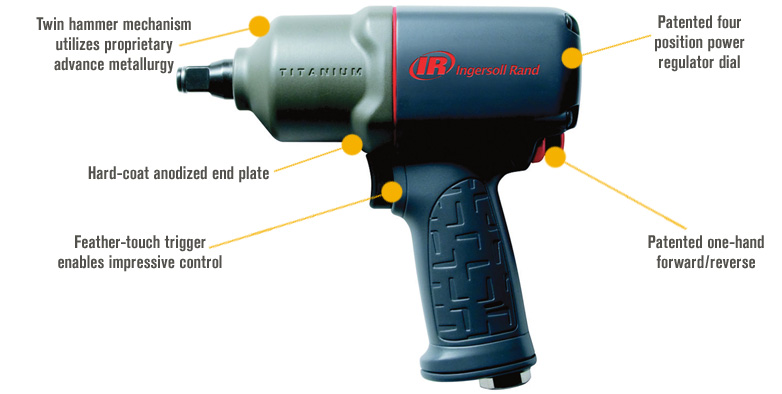 The airflow technology in the 2135TiMAX makes sure that this doesn’t happen. You have to seriously tamper with this thing to make it break. Only one reviewer out of 200+ said that he had an airflow error, and judging by the review he has written, the product he got was damaged during shipping – and it was quickly replaced by Ingersoll-Rand.

You can click here to read that review and the other 150+.

In case you do need to do maintenance on your 2135TiMAX for some reason, it’s easy to do so. In fact, there’s even a part in the instruction manual on how to assemble and disassemble the unit. And remember, you can always call Ingersoll-Rand for real-time support.

The reviews speak for themselves…

We mentioned that one review, but overall, the 2135TiMAX commands a 4.5 star rating. That in itself is nothing special – many impact wrenches are rated four stars and above. The amazing thing is the review distribution…

That review distribution is almost unheard of when it comes to tools. Reviewers for tools – impact wrenches reviewers included – are notorious for being harsh. To say that over 80% of people thought it was a perfect product is unbelievable.

If you need a portable, easy-to-use, and light impact wrench (that still packs a powerful punch), the 2135TiMAX is for you. You simply won’t find another impact wrench that does usability and power together so well.

There is a comparison piece we did couple of months back pitting the 2135TiMax with the Aircat 1150, which are very identical to each other. You should check it out in case you are interested how it turned out in favour of 2135TiMax.